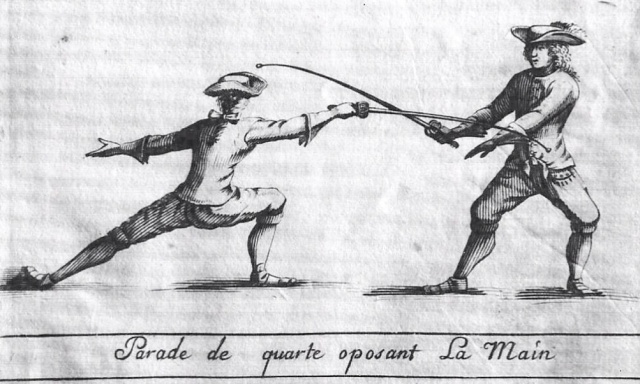 Parade de Quarte Oposant La Main, L’Abbat, The Art of Fencing, or the Use of the Small Sword, 1734.

Not so easily found, this digitized plate from L’Abbat (Labat) is signficantly more detailed than the plates in the digitized treatise circulating the web. Note the defender’s bent blade tip. Monsieur Labat (the translator, Andrew Mahon, misspelled Labat’s name as L’Abbat) addresses this in his discussion in selecting a blade and hilt.  He states in his section on “Of chusing and mounting a Blade” the following:

Some Men chuse strait Blades, others will have them bending a little upwards or downwards; some like them to bend a little in the Fort, and others in the Feeble, which is commonly called le Tour de Breteur, or the Bullie’s Blade. The Shell should be proportionable in Bigness to the Blade, and of a Metal that will resist a Point, and the Handle fitted to the Hand.

Excerpted from: The Art of Fencing; Or, The Use of the Small Sword by maître d’armes Labat. 1763. Andrew Mahon, Translator.
Full Text