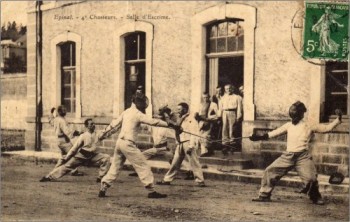 Columbia Classical Fencing, LLC, classes have a regular schedule.  With everyone’s daily demands, this schedule provides the fencers consistency for planning.  Regularity also provides a context for learning classical fencing by ensuring continuity of actions and concepts from one class to the next.  To that end, any given CCF class would follow the following schedule.  (Note that this structure does not contemplate the Fight Night that occurs on the last Thursday of every month.)

Start of Class  00:00
The first few minutes of any particular class is given to people arriving, notifying the head instructor of their presence, changing into fencing clothes, and informally warming up.  Because CCF’s members value our collegiality and consider fencing to be a social pastime, we also spend that time greeting and visiting with one another.

Announcements & Warm-Ups  00:15
At quarter past, the fencers line up by standing in a row, weapon in hand.  The head instructor will use this time to make any announcements to the class, such as upcoming events (classical fencing tournaments or picnics), whether it’s time to pay dues, and what the agenda is for the day.

Once all announcements are out of the way, we begin structured warm-ups.  This activity is to ensure that the fencers’ joints are primed for the class and that their muscles are pliable for lunging or otherwise exerting themselves.  Warm-ups are a required safety measure.  (If a person arrives while warm-ups are on going, then the person can quickly jump into the activity; if a person arrives after the warm-ups, then, before he or she can join the ongoing class, the person will be expected to prepare himself on the sidelines.)

Most of the time, the fencers get ready with line warm-ups (something we also sometimes informally call “follow the leader”).  As before, the fencers are already lined up in a row, facing the same direction.  Likewise, the instructor faces the fencers, several steps in front of them.   At the instructor’s direction, everyone assumes the on-guard position.  The leader then begins advancing and retreating, and the fencers keep pace by also advancing and retreating on his movements.  We do this for several passes, reset, then do it again.  Each time we do it a little faster.

As noted, this is the usual procedure.  Sometimes the instructor will provide other warm-ups such as the “box drill,” or, depending on a time crunch or smaller class size, direct the fencers to warm themselves up. 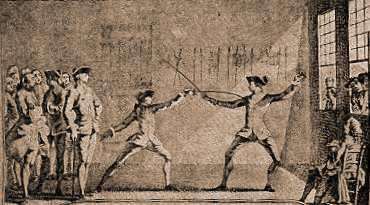 Drilling Begins  00:30
Once warm-ups are over, the structured drilling begins.  At this point, the fencers will break into two groups:  advanced and beginners.  For instance, the advanced group may be working on saber or small-sword while the beginners are invariably working with their foils.  Usually, one group will assemble on one side of the room, while the other group will take the other side.

In both cases, the respective instructor will review what the group covered in the last class and how it connects to that day’s lesson.  That night’s action or concept will then be introduced and put into context, explaining how it fits into classical fencing’s general structure.

After doing this, the instructor will tell the group’s members to pair up and begin practicing the drill.  One fencer will take a turn, then reverse, letting the other fencer practice the action or concept.  At this time, the fencers are not supposed to deviate from the drill—such as by experimenting with other actions or responses—and should instead practice the drill as given.  (As noted below, there will be time later to experiment.)  Also during this period, the instructor will circulate, working with each pair as necessary.

The drills always begin as simply as possible.  During the course of the evening, the instructor will add elements (a different parry, a riposte, etc.) to increase the difficulty and make the practice increasingly realistic.  Also during the evening, the instructor will pause the drilling from time to time to let people rest their muscles, catch their breath, or get a drink of water.  (Indeed, because this is a fencing club and not a boot camp, fencers should feel free to do this whenever they need to:  the risk of injury increases with overexertion, fatigue, and dehydration.)  Frequently, one hour into the class, the head instructor will call a class-wide break for two or three minutes to ensure that everyone is adequately hydrated and energized.

For instance, this time may be used for free fencing.  That is, those with free-fencing privileges may fence with one another with no direction from the instructors and with any weapon which they are trained in.  (However, the fencers are encouraged to attempt to apply that day’s action or concept.)

Alternatively, some fencers (especially those without free-fencing privileges) can continue to practice the concept or action, but with latitude to experiment with or embellish the given drill.

Other possibilities for the remaining class period include physical conditioning, academic assaults, or the comfortable-sounding “Wall of Death.”

More usually, the final few minutes of class are dedicated to winding down, packing away equipment, and preparing to leave.  If the schedule permits, sometimes the fencers will be allowed to stay a few minutes after class to wrap up their bouts or visit with one another.