The Princess and the Eye Patch 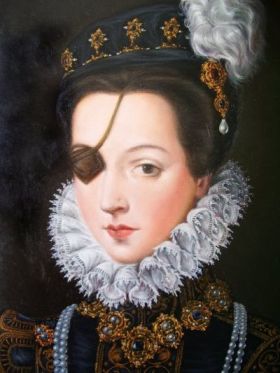 Doña Ana de Mendoza, the Princess of Éboli, is a woman full of historic intrigue and mystery. Fascination of her is fueled not only by her legendary beauty, courtly manipulations, and murderous plot, but also the mystery surrounding an alleged fencing accident and her eye patch. She has captivated attention for centuries, been immortalized in opera by Verdi, portrayed in Hollywood by Olivia de Haviland, and is the subject of numerous books and video productions.  So who is Doña Ana de Mendoza and why is she wearing an eye patch?

A Very Brief Biography
Born in 1540 into the powerful house of Mendoza, Doña Ana was the daughter of Diego Hurtado de Mendoza and Catherine de Silva.  Doña Ana endured what appears to be a dysfunctional home life as a child, including the embarrassment of her father’s infamous philandering, something not accepted in 16th Century Spain.  Little is known of Doña Ana’s childhood, but she was described as passionate, intelligent, religious, and rebellious in her youth.  It is alleged that during her early adolescence, and prior to the development of safety equipment, she lost her right eye in a fencing duel with a page.  In part, it appears the juxtaposition of her renowned beauty and her eye patch has fueled a mystique that has captivated admirers for centuries.  Admittedly, it was her formal portrait with her prominent eye patch and rumblings of a fencing accident that first piqued my interest to learn more about her.

An early arranged marriage to Rui Gomez enabled Doña Ana’s presence in the court of King Philip II of Spain.  Her husband’s wealth and influence provided for financial security and titles following acquisition of estates in Eboli, located on Italy’s southeast coast.  Her husband’s death and her subsequent relationship with Antonio Perez proved to be a fateful turning point for Doña Ana.  Like her husband, Perez was a powerful insider in Philip II’s court. Perez brewed a plot of manipulation between the King and his half-brother involving a rebellion in Flanders and perhaps a move toward taking power in Portugal.  When whiff of the plot was sensed, Perez orchestrated a murder to squelch its further discovery.  Doña Ana, said to have had involvement in the plot, was imprisoned by the King and subsequently stripped of parental rights and property.  Some claim she was treated very harshly by the King, in part due to his sexual jealousy and sense of betrayal, but as with her eye patch, there is a dearth of supporting evidence for such claims. She would die sick, lonely, and imprisoned.

The Fencing Accident?
Numerous and widespread explanations for Doña Ana’s eye patch abound.  They typically assert in matter-of-fact fashion that Doña Ana lost her eye in a fencing accident involving a page, perhaps around the age of twelve.  However, absolutely no evidence has come to light to support such claims.  They appear to be the speculations of historians attempting to explain her portrait — assertions that have much more intrigue than the lesser-known speculations surrounding a horse accident around the age of  fourteen.

Did she lose her eye in a fencing accident? Was her condition congenital or is there another explanation?  Fascination with Doña Ana, especially in Spain, has prompted a 2012 ophthalmological analysis.  Of course, Doña Ana cannot be directly examined so Dr. Enrique Santos-Bueso, of the Neurological Unit in the Ophthalmology Department of the University Hospital Clinico San Carlos, was forced to examine his patient based on what little evidence that exists: a formal portrait and brief accounts of Doña Ana’s literary habits (Matey).

In a close examination of a portrait, Santos-Bueso claims Doña Ana’s right browridge is smaller and lower than her left. This leads Santos-Bueso to conclude she likely experienced trauma that may or may not have perforated the eyeball, but did result in atrophy of the eye and alteration of the facial bones and structure.  The lack of recorded chronic health issues  associated with her eye is cited by Dr. Santos-Bueso as further indication of blunt trauma.  He asserts that, because Doña Ana did not [reportedly] suffer from persistent infection or chronic inflammation at a time when modern pharmaceuticals were unknown, she likely experienced trauma. Santos-Bueso also dismisses indications of other ocular issues. According to Fernandez, a Doña Ana researcher and author, there are accounts of Doña Ana using large print texts and a stencil for writing.  Santos-Bueso asserts this can be explained by the possibility of nearsightedness from youth (Matey).

Portraits are subject to interpretation by the artist.  It is not clear if Santos-Bueso examined more than one portrait.  If so, were they painted by more than one artist and did they show the same facial features upon which Santos-Bueso basis his conclusions?  It seems highly spurious to draw detailed conclusions based on the visual interpretations of one artistic individual.

Parsimony is a virtue.  I cannot help but wonder if an explanation simpler than historians’ speculations and Santos-Bueso’s assertion is more likely, especially in the absence of firm accounts of an accident.  Could Doña Ana have simply endured a physical condition that was socially unacceptable for Spanish high society?  Would it be permissible for a daughter of Spanish aristocracy to openly exhibit a physical deficiency, especially one that disfigured the face?  I wonder if her eye patch could simply have been covering what is known in America as a “lazy eye” (amblyopia), a common occurrence seen in approximately seven percent of children.  I strongly suspect a cross-eyed princess would not have been acceptable.  As it turns out, a main cause of “lazy eye” (amblyopia) is nearsightedness (myopia) — the very condition Santos-Bueso uses to explain Doña Ana’s use of large text and writing stencils.

I don’t claim to have conclusively solved the mystery of the princess and the eye patch.  And I am not convinced that Santos-Bueso has either.  We still don’t know if her eye patch is due to a fencing accident, despite the pervasive assertions.  With other things being equal (namely the absence of a known accident), the simpler explanation is more likely. Although lacking the intrigue of a “beauty disfigured in fencing accident”, nearsightedness leading to amblyopia seems much more likely, though far less romantic.

A Bit More Biography
For those interested in more details about dramatic events of Doña Ana’s life, read on.  Not being a Spanish speaker, it was with some difficulty that I attempted to unravel the story of Doña Ana.  Many of those details are tangential to the issues surrounding the mystery of her eye patch and alleged fencing accident.  Below are more details of the tangled web that was Doña Ana’s life and death.

Her Marriage
Under the advisement of King Philip II, she was betrothed at age twelve to a Portuguese nobleman, Rui Gomez da Silva, the King’s personal secretary and life-long courtier, who was 24 years her senior.  A few years later, Rui and Doña Ana’s marriage would be consummated and she would go on bear Rui their first of ten children.  Like her husband, Doña Ana became well established in the court of King Philip II where she enjoyed a close relationship with Queen Elizabeth of Valois, the king’s third wife.  It is during this time that some allege Doña Ana became the King’s mistress, but this is denied by several scholars.  Whether fictional or otherwise, such allegations have helped fuel dramatic (and largely fictional) story lines on stage and screen, furthering Doña Ana’s mystique.  At about this time, Doña Ana’s parents became further estranged, and her father left with another mistress.

Doña Ana’s husband, Rui Gomez, worked to secure  their children’s future by purchasing the town of Eboli in Naples, as well as several villas.  Rui was granted the title Duke of Pastrana and Grandee of Spain by Philip II in 1572.  This established Doña Ana as the Princess of Eboli and the first Duchess of Pastrana.  Her husband died the following year.  Thus began a series of problematic and dramatic chapters in Doña Ana’s existence.  In grief, Doña Ana and her mother moved to the convent in Pastrana.  While there, she was described as the “Princess Nun”  where she apparently had a rocky relationship with the other nuns, who eventually left the convent (J. Peace).

Doña Ana’s Demise
A few years later, Doña Ana and her mother returned to Madrid against the Kings wishes. Not long after, her mother died, followed shortly thereafter by her father.  However, her father, having married another in an attempt to secure a male heir, had left his second wife pregnant, threatening Doña Ana’s inheritance.

Doña Ana’s husband was succeeded by his protegé, Antonio Perez, as secretary to Philip II.  Antonio Perez, only slightly older than Doña Ana, was a married man.  Doña Ana established a close relationship with Perez, and again, adulterous allegations abound, but some claim their relationship was purely political.  Their relationship was apparently hidden from the King.  Historians are divided as to why that was the case with some claiming it was due to impropriety (given Perez’ marriage), while others claim it was due to Doña Ana’s renewed liaisons with the King.  Regardless of truth, Doña Ana’s relationship with Perez deepens her intrigue in Spanish legend and serves as a turning point in her life and in Spain’s history.

Perez, a trusted secretary to Philip II, became caught-up in a revolt that developed in Flanders. The Duke of Alba and Don Juan of Austria (half-brother of Philip II) were intertwined with Perez in this revolt.  Perez offered to serve as a mediator in the conflict, however, he was playing both sides.  He altered state communiques between the King and Don Juan, and sold state secrets.  Doña Ana was apparently aware of Perez’ treachery vis-à-vis their close relationship, evidenced by their visitations, and exchange of opulent gifts. Don Juan’s personal secretary, Juan de Escobedo, previously allied with Perez as his spy against Don Juan, turned against Perez and also discovered the relationship between Perez and Doña Ana.  At this point, it is alleged that Perez and Doña Ana conspire to assassinate Escobedo.  Some historians assert Doña Ana was not an active participant in the plot, but was merely complicit.  Though several more machinations in this operatic saga occur, Philip II discovered the treachery of Perez and Doña Ana.  Perez held off trial for several years, having somewhat assuaged Philip II with accusations of Don Juan’s pernicious intentions towards Philip’s throne.

However, Doña Ana was placed under house arrest in 1581. The King stripped Doña Ana of her parental rights and property in 1582.  This relatively harsh treatment of Doña Ana helps fuel allegations of the King’s sexual jealousy and romantic relations with Doña Ana.  In 1589, ten years after the discovery, Perez was finally charged with the murder of Escobedo.  This led to riots and unrest by Perez’ supporters.  In 1590 Perez escaped to Aragon.  Perez, in exile, published  scathing, defamatory accounts of King Philip II’s court, assertions that went unchallenged, contributing to the Spanish Black Legend.  Doña Ana, imprisoned for a decade, eventually died depressed and ill in 1592.

1 Response to The Princess and the Eye Patch