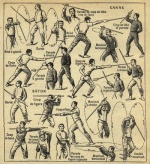 An overview of the history of Nineteenth Century French cane defense (la canne) has already been presented by Morgan here. Below are some visual references* to the use of the cane and to the Paris Apaches as depicted in the media at the turn of the century. Although somewhat contrived, as formal portraits can be, the photograph of Les Apaches de Paris is worthy of close examination; a number of weapons are visible and one Apache appears to bear a couteau scar—that is, a knife scar—on the cheek.

Further Reading:
Republication of historic information on the Vigny school can be found in the Journal of Non-lethal Combatives here.

An historic comparison of early mixed martial arts (turn of the Century) can be found in the Journal of Manly Arts here.

An overview by Barton-Wright of his Bartitsu defence with cane and umbrella, originally published in Pearson’s Magazine, 11 (February 1901), can be found in the Journal of Non-lethal Combatives here.

* All images are republished here as faithful reproductions of historic works in public domain pursuant to the EU Copyright Directive (2001) and Bridgeman v. Corel (S.D.N.Y. 1999).